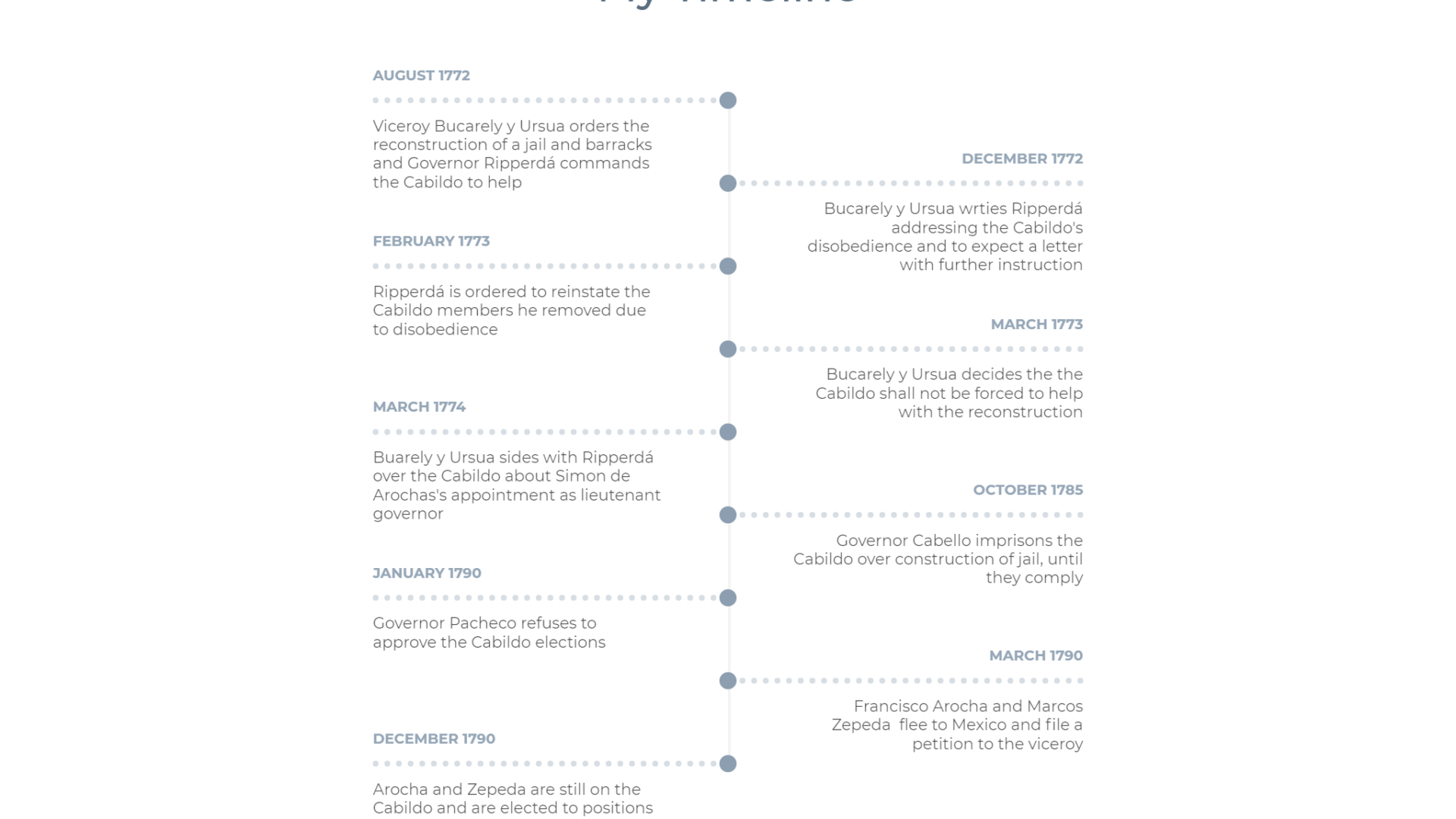 San Antonio de Bexar was founded on May 5, 1718, as a Spanish frontier town. In this frontier town there were two major political forces. On one hand, you had the governor of Texas, who managed the entire province and took care of its military defenses. The Cabildo is the other political force. It was the city council and dealt with municipal issues. These two offices were often in conflict, and even though one may be led to think the governor would usually emerge victorious due to rank, that was not always the case. Today we will be looking at a few conflicts between these two offices, and how they played out.

The Cabildo and The Governor

The Governor of Texas did not live in San Antonio until 1771, when Juan Maria Vicencio, Baron de Ripperda, assumed the position of governor. Shortly after this the capital of Texas also moved from Los Adaes to San Antonio. The fact that the Cabildo and Office of the Governor are now in the same place will lead them to clashing more often and in more explosive ways.

Governor Ripperda received his appointment as governor in late 1769, and his first letter to Bexar mentioned that he desires the welfare of the town is looking forward to the work. It seems that his ideas for the town and those of the council differed. The first notable conflict between these ideas concerned the reconstruction of jail and barracks in 1772. In August of that year, Governor Ripperda ordered the Cabildo to assist with the reconstruction. The Cabildo refused, believing that the responsibility to do so belonged to the governor alone. This standoff lasts for a while, eventually angering Ripperda, who decides to suspend the Cabildo, preventing them from performing their duties.

Issues between the Cabildo and Ripperda calm down from there but conflict arises with a later governor in 1785 over the same issue. In October of that year, Governor Cabello receives orders from the viceroy that he must reconstruct the jail, and he should order the Cabildo to assist with it. Governor Cabellos does just this and the Cabildo once again protests this idea and claims that based on the earlier decision they can not be forced to help with the construction of the jail. They do not even appeal to the viceroy here, they just try to use a previous decision as to their rationale for denying the governor After repeated disobedience by the Cabildo, Cabello gets fed up and locks up the Cabildo. Eventually, word from the viceroy arrives ordering the Cabildo to help with the reconstruction of the jail. While the Cabildo lost this exchange, it goes to show just how emboldened they were and how far they were willing to argue with the governor.

One of the biggest conflicts that happened between the two offices occurred started in 1790 and ended in 1791, with the next governor. In December of 1790 the Cabildo turned in the results of the election of next year’s members to Governor Pacheco, but Pacheco refused to approve the new council. His reasoning for doing so was that three of the members would be holding the same positions they held the year before and there needs to be circulation on the council. This is the issue that arose by allowing the incumbent members to vote for the incoming Cabildo. The Spanish government officially forbid this so, Governor Pacheco gave them a fine and told them to redo the election. The Cabildo refused to do so. In January of 1791 two members of the Cabildo, Francisco Arocha and Marcos Zepeda, fled town to go appeal their case to the viceroy in Mexico. The author was unable to find records indicating the decision of this appeal, but it can be inferred that it succeeded because Arocha and Zepeda were both on the council the following year. They were then able to be elected again the following year. One could gather from this that their appeal succeeds and made it so Cabildo members could continue to be reelected onto the council.

What this tells us

Looking back at these examples we can see how conflicts between the Cabildo and governor worked out. It usually had to be appealed to a higher authority, in the form of the viceroy. The office of the viceroy did not seem to favor either the Cabildo or the governor but worked on a case by case basis. The governor’s office proved not to be an all-powerful political force, instead, it had to work with and adjust to local politics. It seems the viceroy only respected the fact that the Cabildo should be controlling municipal affairs, but if their concerns encroached on the military defense of the city or province would side with the governor. The two offices were constantly in conflict with each other one they governor moved to San Antonio, but this conflict served to hold both offices accountable to each other and the larger Spanish colonial system.

The Cabildo focused on working towards ensuring that they kept local and personal power. Every action the Cabildo makes in the above situations is about ensuring they keep the power near them. In the first and second confrontation the Cabildo focused on making sure that they didn’t have to use resources to help rebuild the jail when they thought their maybe better uses of those resources. If the governor wanted to build a jail then the governor should use his resources to build a jail. In the last confrontation the members of the Cabildo wanted to ensure that they kept their power at a personal level. Here we see individual members fighting against the governor to keep their power in the community.

“Translation of certified copy and original proceedings concerning the governor’s order to the Cabildo of San Fernando to have the residents help in the repair of the jail and barracks.” October 12, 1785. Letters. Bexar Archives, Briscoe Center for American History, Austin. Utexas. 28 April 2020. https://www.cah.utexas.edu/projects/bexar/gallery_doc.php?doc=e_bx_007300

“Translation of document presented by Fuentes calling upon the Cabildo, the republicanos, and the citizens of San Fernando to settle the quarrel about the municipal elections.”  March 5, 1790 Letters. Bexar Archives, Briscoe Center for American History, Austin. Utexas. 28 April 2020. https://www.cah.utexas.edu/projects/bexar/gallery_doc.php?doc=e_bx_008879